Believe it or not, Elvira, in all her almost-eighteen years of living with me, has never scratched on anything in my house, not even on the scratching post. Instead, in her younger years, she scratched on the rails and floor of the sundeck or on tree trunks. Now that she rarely goes outside, she isn’t doing any scratching at all. Cats need to scratch, so I worry about that, but she seems to be all right with it. She is the perfect cat.
My cat Tibby was a different story. She scratched on everything her paws could get a hold of, except the scratching post. This she studiously avoided, no matter how may treats and dangling toys I loaded it down with.
One of her favorite pieces of furniture to scratch on was the sisal basket next to David’s recliner. I spent weeks looking for this basket. I had to have an oversized basket to balance the oversized recliner David claims as his. I finally found just the perfect basket, paid an oversized prize for it, brought it home, and placed it at the side of David’s recliner. It looked like it belonged there. I dumped all David’s magazines, newspapers, catalogues, and instruction books for mowers, tractors, air compressors and other whatnots into the basket, congratulating myself on my find.
A few minutes later, Elvira strolled through the room. She took one look at the basket and kept on strolling. Then Tibby came sauntering in. Spying the basket, she stopped mid-saunter. Squaring her shoulders resolutely, she marched over to the basket and dug her claws in. I looked at the basket and then at her. Smart enough to know when I was beaten, I gave up.
Tibby has been dead for almost eight years. And I still have the basket. It is in tatters, one side is caving in, it sheds sisal daily, but I cannot bear to throw it away. It is still filled with magazines, newspaper, catalogues, and instruction books. And my memories. 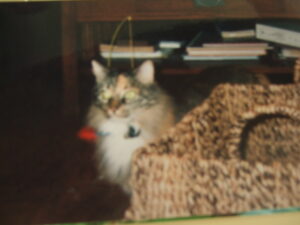