Fascinating Similarities Domestic Cats Have With Big Cats of the Wild 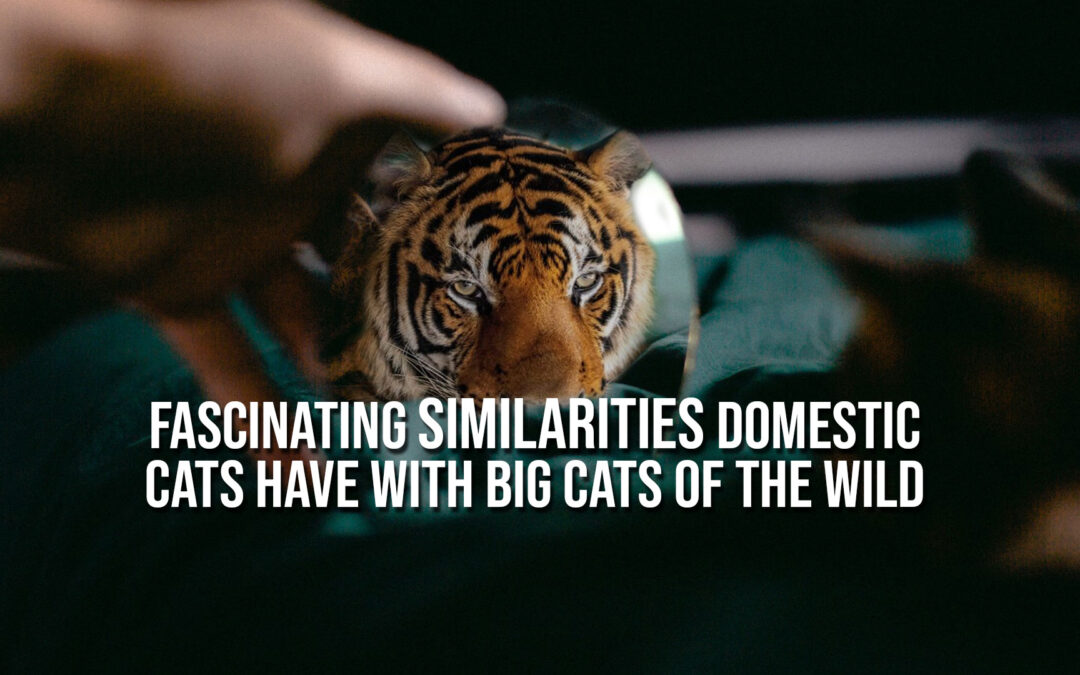 Fascinating Similarities Domestic Cats Have With Big Cats of the Wild

It can be amusing to consider your pet cat like they are wild predators. This furry and small creature leaps from sofa to sofa, trying to capture laser pointers. How can one even think that this adorable companion is similar to the big cats of the jungle? That is where you are wrong; their similarities are more than imaginary. As some may have known, your pet cat and other animals like lions, tigers, and puma, belong to the same family: the Felidae family. This family of mammals may seem to have distinctive physical features, but they all come from a common ancestor.

What’s more, is that they also share plenty of commonalities. Your pet cats may seem to be domestic animals, but they’re not fully domesticated. That kitten on your lap right now can never be truly tamed.

As you watch your pet cats play and climb, it’s not hard to find similarities to larger cats roaming in the world. These feline friends in your homes always impress you with their cleverness and agility to which big cats also possess. If you are still not convinced, then this article will prove it to you. Below is a list of quirks about your pet cats s the big cats found in the wild.

Lions are known to be kings of the jungle for their strength, bravery, and power. Lions, like other wild cats, fear no other animals. Lion kings maintain order and make laws to punish those that don’t abide. Lions hold superiority over other predators. They fight to eat; they fight for their position, and they fight for survival. Similar to the domestic cat in your homes, they are also indomitable. Although they face different challenges, they have a steadfast spirit that will make them succeed no matter what.

In the Lynda Hamblen book with an indomitable kitten, William and Tibby Forever, her fur-baby Elvira was faced with an illness threatening her life. However, Elvira has an indomitable spirit, and she was able to overcome this illness.

Both are Natural-born Hunters

House cats and big cats differ in size; however, you see they have anatomical similarities. They have the same body built, powerful legs, flexible backs, retractable claws, and sharp teeth, all of which are necessary for hunting. They also share the same method in hunting, which is stalking their prey. The difference between the two, however, is what they hunt. Domestic cats hunt mice, rats, birds, and fish, while big cats hunt varied prey, including gazelle, deers, and zebra.

Have you noticed that your cats spend most of the day sleeping? Their huge cousins also do the same. Both wild and domestic cats spend between 16 to 20 hours a day sleeping to conserve energy. Nearly half of a cat’s life is spent sleeping. Furthermore, these cats can go from asleep to instantly awake if they hear sounds from possible prey.

Both are Nocturnal Creatures

Remember the nights you’ve woken up in the middle of the night from all the crazy sounds made by your four-legged friend? It so happens that your pet cat is a crepuscular creature meaning they are most active between dusk and dawn. On the other hand, big cats are also awake during the low light as this is the ideal time to hunt. Both cats have eyes that enable them to see in the dark better.

Both wild and domestic cats are obligatory carnivores. Although they have an incredibly different diet, they have one thing in common, which is meat. They rely primarily on a carnivorous diet to be able to digest proteins. They require high levels of protein to make hormones necessary for reproduction.

Both Scent Mark Their Territory

House cats rub themselves against you, the furniture, the walls, and other stuff inside the house. You might think that it is a cute attention-seeking behavior; however, this is not the case. They are marking their territory, and rubbing allows them to leave behind their scent. Out in the wild, big cats also use the same method. Both cats have scent glands all over them to which they rub against their territory.

Young domestic cats tend to play more than adult cats. You may buy your pet cat catnip mice and feather wands for them to play. These toys may not be available in the wild, but it does not stop wild cats from playing. Big cats play with each other to learn necessary skills and also for the fun of it. Big or small cats, no feline can resist a play session.